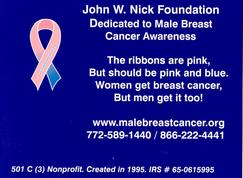 We are a small charity created in 1995. We count on individual donations. Please help our cause and make a Secure Donation! Thank you

1. What are the causes and risk factors of male breast cancer?

Male breast cancer (MBC) may occur more frequently in men with some of the following characteristics: never married, Jewish ancestry, previous benign breast disease, gynecomastia (breast enlargement in males), history of testicular or liver pathology, positive family history of breast cancer, or prior chest wall irradiation. As with women, aging is one of the largest risk factors behind male breast cancer.

Statistics show that the average male diagnosed with breast cancer is 65 years old. Diseases of the liver can put men at risk for developing breast cancer because the liver plays an important role in sex hormone metabolism. Men who have underlying estrogen treatment can have a slightly higher risk for breast cancer. Klinefelters's syndrome, which is a congenital condition, also puts men at an increased risk because it increases estrogen levels and lowers androgen levels.

Today many thousands of Ashkenazic Jewish women and men around the world carry that mutated gene. Some of the female descendants who have inherited the mutated BRCA1 gene have developed or will develop breast or ovarian cancer. Women who inherit abnormal (mutant) forms of the breast cancer gene many have up to an 85% chance of contracting breast cancer and a 44% chance of contracting ovarian cancer in their lifetime. Men who carry a BRCA1 or BRCA2 mutation also have an elevated risk of breast cancer, though not as high as the risk faced by women. In their normal forms, the BRCA genes control cell growth and suppress cancer. Ashkenazi Jewish women may carry two specific mutations which have not been found in the non-Jewish population.

When reviewing your family history, it is important to consider both your father and your mother's side of the family since an altered gene can be inherited from either parent. Gather information on all types of cancer because other cancers can be associated with hereditary breast cancer.

These include:  • Breast cancer diagnosis before age 50

•Breast and ovarian cancer in the same person

•Ovarian cancer at any age

2. How common is male breast cancer?

In the United States, approximately 2030 new cases of MBC are diagnosed annually, and 450 deaths occur; this represents less than 0.5 percent of all cancer deaths in men annually. By contrast, in Tanzania and areas of central Africa, breast cancer accounts for up to 6 percent of cancers in men. In the United States, the ratio of female to male breast cancer is approximately 100:1 in whites, but lower (70:1) in blacks. Blacks also have a poorer prognosis.

3. How do I best prevent male breast cancer?

There is no known way to prevent male breast cancer. Early detection through breast self examination is very important.

4. What are the symptoms of male breast cancer?

As with breast cancer in females, male symptoms usually include the presence of a hard, painless lump and nipple discharge (usually bloody).

The nipple may also be inverted, and accompanied by local pain or itching.

A firm mass directly beneath the nipple is by far the most common presentation of breast cancer in men. Other symptoms to watch out for include:  •Swelling of the breast.

•Redness or scaling of the nipple or breast skin.

•A change in skin texture, such as dimpling or puckering.
Of course these symptoms don't necessarily mean that you have breast cancer. Some of these symptoms can be caused by other conditions, gynecomastia being the most common; however, it is important to see your physician if you have any of these symptoms.

Since symptoms in men tend to be ignored for longer periods, the disease is usually in a more advanced stage when diagnosed. A man should never hesitate to see his doctor if he notices these symptoms.

What if a doctor tells a man there's nothing to worry about upon discovering a lump? The man should get an immediate second opinion. Remember, not all doctors are aware of male breast cancer, and if your doctor isn't aware, make sure to send him or her to our website to start some research.

5. How will my physician confirm whether I have male breast cancer?

The same way he or she would confirm it in females. A biopsy is performed either by needle aspiration or standard excision/incision. Tissue evaluation is essential if there’s concern regarding possible malignancy. A physical examination with complete medical history, blood studies, mammogram and scans is used to establish the extent of the disease.

If tests show up positive for male breast cancer, a mastectomy (removal of the breast) is usually performed.

6. Do men have cosmetic surgery after a mastectomy?

A man generally faces fewer cosmetic and psychological needs in this case than women do. There are, however, relatively simple procedures to reconstruct a man's chest, including tattooing.

Gyynecomastia is a benign breast condition, the most common male breast disorder in which firm breast tissue forms directly under the nipple and areola. The growth is described as button-like or disk-like and may make the breast tender. Common among teenage boys and also older men, the condition is due to changes in hormone balances.

8. Is it true that marijuana can cause gynecomastia?

Street drugs that may cause gynecomastia include marijuana, heroin and alcohol.

9. Is it good to have annual screening with a mammogram?

Unless a suspicious breast mass in a man is present, routine screening mammography is not recommended. The mammogram is abnormal in 80 to 90 percent of MBCs, and can usually distinguish between malignancy and gynecomastia. In one study, the reported sensitivity and specificity rates of mammography for the diagnosis of MBC were 92 and 90 percent, respectively.

Unlike mammography, which uses low dose x-rays, MRI’s do not expose the patient to ionizing radiation. Additionally, the false-negative (missed cancer) rate for mammography is around 10%. However, MRIs have high rate of false positives, which, like a false alarm, can lead to unnecessary biopsies.

Although some studies indicate that MRI may be better able to detect certain breast cancers compared with mammography, the cost, high rate of false-positives, and inconsistent standards for performing MRIs have made broad use impractical.

Because the majority of MBCs are hormone receptor-positive, five years of adjuvant tamoxifen is recommended for most men following mastectomy

For advanced (metastatic) MBC, hormone therapy is usually the first approach for men. Systemic chemotherapy is generally reserved for treatment of men with rapidly progressive or symptomatic organ involvement, those who become refractory to hormone therapy, and for the treatment of hormone receptor-negative tumors.

12. If I am diagnosed with MBC, what is my prognosis?

In two reports involving 335 and 397 cases of MBC respectively, the following 10-year disease-specific survival rates were reported:
• No spread to lymph nodes — 77 and 84 percent

In summary, if MBC is detected before it has spread to the lymph nodes, your chance of living for 10 years is around 80%.